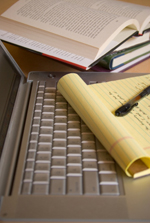 Editing is writing and editing is inevitable. Editing can never be ignored.

Editing a manuscript, no matter the number of draft it stands, in a visual concept can be looked at as reshoots. I’m calling my edits, at this stage in book 1, reshoots because of one factor – visually learning.

Seeing the edits in my head as a visual medium as though I’m cutting film, since I love movies, is helping me understand how to edit better. To see a previous scene in the manuscript as being shown on screen during tests. If the scene doesn’t work visually with engagement and pace, then it must be completely edited out and then reshot. Previously seeing these edits as a flat format of a 2D structure clogs my mind with paper and words. Seeing it as reshoots makes my mind happy in seeing the problem solving in action. Full color, sound and movement.

The current edits I’ve found, with the help of a Reddit user who has offered their help as a critique partner, has opened my eyes. There is a scene in book 1, chapter 2 for example, where the character Ambros is lingering in the Geraci mansion to look for more clues. The next scene shows Frankie in the dreaming for the main part of the chapter. This Ambros/Geraci mansion scene seems extra and should be on it’s own, says my CP (Critique Partner) on Reddit. They are able to see problems I couldn’t because I’m far too close to the material. Not seeing the forest for the trees, or however that saying goes.

Another chapter, chapter 3, concerning Brandon, the pace of his development is blocked by Vivian. Their interaction seems forced and unnatural cause of what’s going on. With the eyes of my CP, and my previous thoughts on the matter months ago, the Brandon character needs to be away from Vivian. By doing so, he won’t know who she is and can stay in New England interacting with Catherine in a more natural setting that his character development demanded. This will force Vivian to confront her husband more directly in what she needs to take her road trip. Now that my CP saw what I suspected and we both agree on this change, visually the Brandon character has shown himself to me in my mind. Where as before, he refused to appear. Now I understand why.

Not only are large reshoots found, so to are small fixes. Such as – descriptive aspects of a character’s house for the Umari family. I hadn’t thought about describing their house and hadn’t put a place holder on it. It had slipped my mind. I had mentioned it being a townhouse later in the book or in book 2, if memory serves me correct. But that does not excuse to lack in place markers for future needs. If ever there is a place you must go back to – leave an area in BOLD with a side note. You’ll be grateful for it later during reshoots.

Seeing my edits as reshoots has helped clear my mind to focus more directly on the material in front of me. I’m grateful for this lesson by my CP and my subconscious helping along.